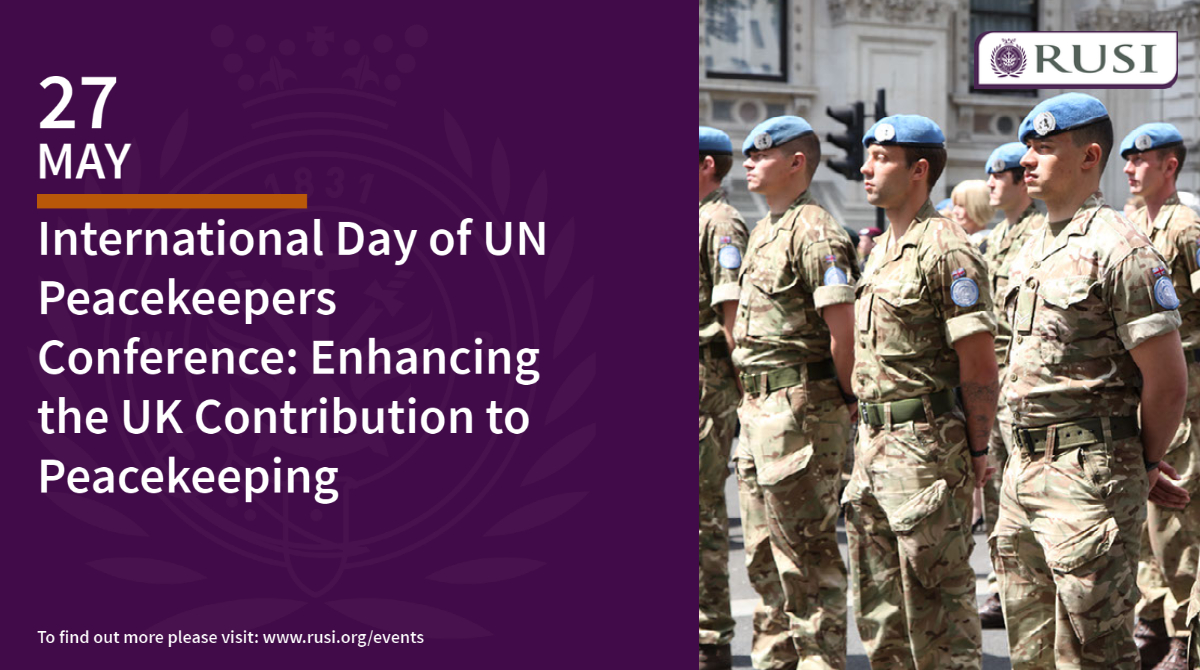 On 27 May 2021 RUSI[1], UNA-UK[2]and the UNA Westminster Branch held the annual International Day of the UN Peacekeepers Conference: Enhancing the UK Contribution to Peacekeeping. The Conference provided a comprehensive and insightful discussion surrounding three key topics: the UK’s role in peacekeeping and more generally how states can boost peacekeeping and encourage multilateralism; the UN Mission to the Democratic Republic of the Congo (MONUSCO), and the future of peacekeeping from a human-centred viewpoint.

The UK’s financial contribution to UN peacekeeping in the last financial year was £340m and is one of the top three donor countries. At the end of 2020, a long-range reconnaissance force of 300 UK personnel was sent to Mali as part of the UN peacekeeping operation (MINUSMA). The deployment filled a gap in intelligence-led planning, and was part of the 60 nation UN command in that country. The sharing of know-how, for instance in the use of drones, was given as an example of UK contribution to peacekeeping. Ms Matthews talked about the UK’s Conflict, Stability and Security Fund and the UK’s advocacy of gender advisers and the commitment to continue to fund the Elsie Initiate which would amount to £1.2m this year.Tackling sexual violence in conflict was considered a UK priority.

Ivo Werneck talked about the importance of diverse/mixed deployments and specifically mentioned the operational benefits of women being deployed, bringing different dynamics and able to engage in different ways. He stressed that it was vital to work with all peacekeepers from any part of the world and to blend them so they operated as one unit, and to the same standards. He said that risk existed in all situations but that peacekeepers could not walk away because of this – risk had to be managed and minimised.

Tim O’Brien emphasised training and how the time committed to it, particularly pre-deployment, should reflect the importance placed on peacekeeping. He explained how, following the Cold War, a new school in Ireland was established to focus on training for peacekeeping. Multilateral solutions are sought and soft skills are required by peacekeepers. All personnel must know about human rights and gender rights. In training, game technology is used. An important aspect of peacekeeping was the capacity-building of the host nation’s forces.

In response to a question posed by SecurityWomen’s Lucy Hall, on ways of increasing women’s participation in peacekeeping, these points were mentioned:

·      Women need to be represented in promotional material.

·      Intervention in schools to encourage girls to consider a career in the military.

·      Elsie Initiative funding - instrumental in looking for ways to break through recruitment barrier.

·      Most member states do not have large % of women in security services - not attractive or not given opportunity? Points to a need to work with individual states.

·      Critical that women are part of the planning and decision-making because of the different perspectives they bring.

Following this, the second session included an interview with the Special Representative of the Secretary-Generaland Head of the United Nations Organization Stabilization Mission in the Democratic Republic of the Congo (MONUSCO), Bintou Keita, conducted by RUSI Director General, Dr Karin Von Hippel. This afforded an insight into the MONUSCO peacekeeping operation, highlighting the mission’s current challenges, opportunities, and recognising that the nature of peacekeeping itself is beginning to be influenced by those who are leading the mission on the ground.

The third and final session, the ‘Margaret Anstee memorial seminar: the Future of Peacekeeping’, included the following speakers:

The range of topics covered the evolution of peacekeeping and potential reforms to improve operational effectiveness and mission outcomes. The shift towards a more people-centred approach to ensure peacekeeping protects civilian populations throughout all phases of the mission was also deliberated. The need for training in cultural sensitivities was emphasised, and the importance of a gender perspective at the centre of peace operations which promoted local dialogue and the rule of law. Further, the panel considered the validity of peacekeeping during times when it is not wanted by the local populace, and is poorly executed on the ground.

·     The UK is about to deploy its first police officer (a DCI) to a UN mission since 2016. The UK’s police (non-troop) contributions have been zero for some time. Ivo suggested that this is something the UK could increase. Given the UK government has articulated a desire to strengthen peacekeeping activities around the world, is this level of contribution likely to improve? And, if so,will this include contributions of junior officers as well as senior?

·     Does refocusing the work of militaries around peacekeeping, conflict resolution and humanitarian support, rather than warfare per se, make it easier to recruit personnel? Are there any examples of military recruitment campaigns presented in these ways increasing levels of interest, and in particular diversity of applicants?

Additionally, a moving video was aired at the Conference to commemorate International Peacekeepers Day, which took place on21st May 2021. The video recognised the UK’s involvement in peacekeeping in Mali, women’s growing participation as peacekeepers, and paid tribute to all those lost in the service of peace. The video was produced by David Wardrop, and is available via this link.

SecurityWomen would like to thank the organisers of the event for an engaging Conference and aim to see the UK’s participation in peacekeeping missions increase and ensure women’s full participation at all levels.