Can Women Make a Difference? 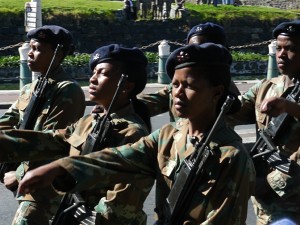 In March 2020, there were two strategic 5 year plans published by the South African government which came to my notice. The first was from the Department of Defence (DOD) published on 12 March 2020[1]and the second from the Police Service (SAPS) published on 20 March 2020[2]. What is striking is the difference in approach, and the reference, or lack of, to women in the achievement of their goals.

One would have thought that a modern police service would recognise the tremendous potential of having equal numbers of women and men within policing as a means to provide a more responsive and better security to society and all its members. That would mean not only female police officers on patrol in communities, but in all areas of police work, from forensic analysis to cyber-security, and most especially in leadership positions. If an inclusive working environment and culture is to be achieved, then women need to be part of the leadership and decision-making structure. It is not as if the South African police service has reached gender parity in its staffing – far from it. However, a strategic goal to successfully integrate women is not present in the SAPS strategic plan, even though at one stage it refers to the Employment Equity Act 1998[3],which, based on South Africa’s Constitution, requires equality of representation. There is no mention of how SAPS intends to bridge the gender gap. The only reference to gender is with regard to gender-based violence and femicide (GBVF) which is deemed a serious problem and pledges are made to halve the number of cases.

On the other hand, in the DOD report, the actual percentages of participating women are stated: 19.58% women in uniform and 39.44% PSAP[4]women in SMS[5]posts. OK, so the percentages are not quite there in terms of reaching the 50%, as set out as the equity requirements in law, but with the recruitment and selection of young people into the MSDS[6],the South African National Defence Force (SANDF) is mindful of its recruitment targets and is working towards this.

Further, it is the overall tone of the DOD report that is different. It states 7 areas in which the SANDF will be employed: the first of these is Peace Support Operations, followed by African security activities and cooperation with AU Peace and Security capability. The next section is about prevention and resolution of conflict, followed by humanitarian assistance and disaster relief, and then maritime piracy and then finally, the contribution by the DOD to building safer communities. It feels very much like a feminist foreign policy: prioritisation given to preventing conflict and violence through collaboration and a focus on humanitarian activity.

The difference between the two departments is in the leadership. The DOD is headed by Ms Nosiviwe Noluthando Mapisa-Nqakula, where she has been the Minister since 2012[7]. In a recent article[8], she talked about her accomplishments in making the SANDF an employer of choice and particularly for women. With regard to promotion, she insists on fairness and balance: “The generals know I will scrutinize any promotion list before approval. They know the minister will ask the question, ‘Any women on the list?’”

[7] Appointed Minister of Defence and Military Veterans in 2012,previously Minister of Correctional Services (2009-12) and Minister of HomeAffairs (2004-9)