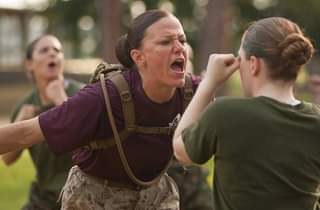 Janet McIntosh is a professor at Brandeis University, who specializes in cultural anthropology, covering linguistic and psychological anthropology and militarization/demilitarization, amongst other topics. She was the key speaker in the NYU Spring 2022 colloquium where she talked about her current project on “Language Anxieties and Necropolitical Acculturation in the US Military”. What ‘necropolitical acculturation’ means is the use of power to dictate how people, in this case, recruits to the US Military, should act, imparting a sense of personal value or lack of value to their lives, and getting them to conform to the military way of doing things.

During her presentation, Professor McIntosh explained the culture of the US Marines, in the early stages of becoming a soldier. There are many styles of interactions between recruits and drill instructors that shape the means of gaining conformity. One key method that stands out is yelling, which McIntosh describes as “semiotic callusing”, in other words, indicating a harsh and unfeeling means of communicating. Drill instructors yell commands at soldiers as a way to make them disciplined. They say it is part of the rite of passage that turns a civilian into a marine, turning a boy into a man who is fighting in service for his nation.

To drill sergeants, yelling makes a better fighter and helps them get used to hearing them yell. This way, when they’re on the battlefield with guns firing all around them and loud military vehicles are moving around, soldiers can hear each other and make sure everyone is doing what they’re supposed to without miscommunication. But, is yelling an effective method to train their soldiers? The description above sounds old-fashioned, a scene from the previous century’s two world wars.

Professor McIntosh continues, “They may be semiotically denigrated during training through verbal and physical debasement that indicates their lowly and unformed state, though sometimes, depending on the society, semiotic debasement lasts for the duration of military service”. Drill instructors use verbal debasement to teach soldiers to have tough skins. Further, they say, it is about teaching soldiers to dehumanize the enemy in war, with the objective of creating the world’s best fighters. One form of verbal debasement would be the use of profanity. They would also use words, such as “cry-babies, ladies, little girls, sweethearts” which are all considered dehumanizing and feminizing language. Even though military policies don’t allow this under standard operating procedures, they do it anyway to, again, toughen soldiers up and motivate them to do better. It points to the military as not only a masculine but an actively masculinising space.

This may seem universal, but in actuality, other countries don’t use yelling as a method of training for their soldiers. McIntosh mentioned speaking to Canadian Sergeants and they were astonished by this method and didn’t see the meaning behind it. The Canadian sergeant said that when a soldier doesn’t do something the right way, they solely motivate them to do better without the yelling, but in an encouraging sense.

Finally, this brings up many questions about how women fit into this. In fact, there aren’t many women in the US military that work as drill instructors. This is because if they yell and their voice cracks or their voice just isn’t “intimidating enough” they won’t be taken seriously and soldiers may not have that certain level of respect for them that they need towards their drill instructors. Surely, there are other methods that create respectability without yelling or using profanity to discipline their soldiers? Conformity most certainly can be achieved by developing a positive spirit without belittling or denigrating an individual.