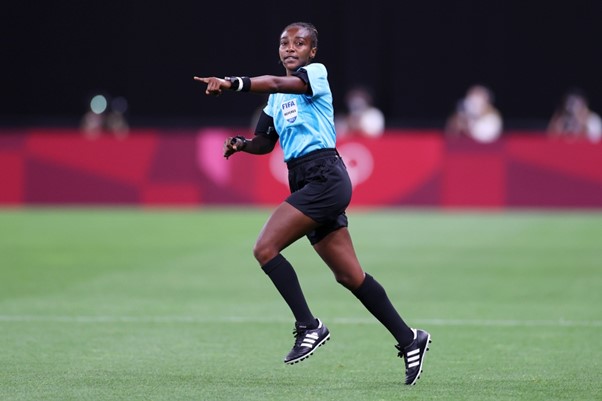 As the World Cup 2022 opens today in Qatar making history at it will be three women referees, the first time in 92 years of the competition that women have been allowed to officiate at World Cup matches.

Joining Salima Mukansanga from Rwanda, on this historic occasion will be Yoshimi Yamashita from Japan, and Stephanie Frappart from France.

Women officiating at this level of a sport that has traditionally been restricted to men is comparable to the long climb women have had to make through the ranks of the security sector which historically has also been dominated by men.  Now we have women generals and brigadiers in the UK, US and other militias across the world, including among UN peacekeeping missions and international police services.

As Mukansanga says "The opportunities are there - and it's up to us to take them and become productive from them."

Earlier this year, Mukansanga became the first woman to take charge of a match at the men's Africa Cup of Nations, which was first played in 1958, and last year she officiated at the Olympic Games in Tokyo.

"You carry a lot on your shoulders,” said Mukansanga, “And you need to carry it well, so others can see that the door is open and they can also go through.”

SecurityWomen congratulates Mukansanga, Yamashita and Frappart on their achievement, and hopes more young women will be inspired by their stories to go through those doors.