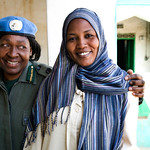 Speaking at the Security Council’s meeting on 14 November, the Under-Secretary-General for UN’s Peace Operations said steps are being taken to strengthen gender-responsive policing efforts to ensure the varying security needs of women, men, girls and boys are taken into account.  He went on to say this was being achieved through the setting up of a network of gender advisers and police gender focal points.

In the ensuing discussion many speakers emphasized the need for greater gender representation in United Nations policing, with several underscoring the vital role female police officers play in fostering trust with local communities and protecting the most vulnerable groups, including women and children.

Among them was the representative of Gabon, who emphasised the essential role of women within police units, particularly in outreach activities, peace and peacekeeping processes. She noted that their presence encourages women to become more involved, and that in most cases of sexual violence or in the context of fighting crime, local communities are more open to interacting with female police officers. "Increasing the number of women in the police components of peace operations constitutes a major challenge that the Organization must take on," she added.