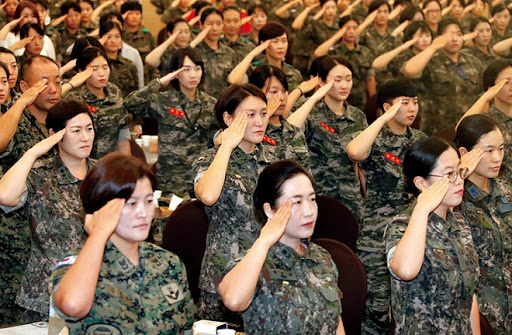 Female soldiers salute the national flag during a ceremony in Seoul on Sept. 6, 2017, to mark 67th anniversary of the establishment of South Korea’s Women’s Army Corps. (Yonhap) Koreabizwire

A heated debate in South Korea about mandatory military service for women is inflaming divisions between the sexes rather than narrowing social gaps, the country’s gender equality minister Chung Young-ai said in a recent interview. The issue has been the subject of wide discussion since April when ruling party lawmaker and 2022 presidential hopeful Park Yong-jin reacted to local election defeats by suggesting that mandatory military service for women would promote gender equality. An online petition to the office of President Moon Jae-in demanding female conscription received almost 300,000 signatures as of Tuesday, surpassing a threshold that requires a response.

Conscription has fostered employment perks that can benefit men when they complete their military service -- and put women at a disadvantage as they start their careers. The wage gap between the sexes ranks among the largest in the developed world and clouds the country’s long-term economic prospects. Minister Chung believes that women's economic inequality should be addressed by solving chronic problems such as income disparity, a low birth rate and systemic gender-based discrimination. Chung described the focus on conscription for women as “problematic.” “The debate on women serving in the military didn’t come from trying to achieve gender equality, but from voices who are asking women to experience the same disadvantages that men did,” she said.