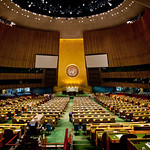 The United Nations General Assembly (UNGA) adopted a resolution on 3 September 2022 condemning all forms of sexual and gender-based violence and urging all countries to provide victims and survivors with access to justice, reparations and assistance.

The resolution was sponsored by Sierra Leone and Japan, and was passed after the defeat of four amendments, including one of which would have eliminated language from a previous General Assembly resolution urging countries to protect women’s sexual and reproductive health and reproductive rights.

Other amendments would have removed references that recognize “the particular risk of sexual and gender-based violence faced by all those who suffer multiple and intersecting forms of discrimination.” The fourth rejected amendment would have eliminated a reference to “intimate partner violence.” All of the amendments were rejected by a 2-1 margin.

SecurityWomen welcomes the passing of this resolution which confirms international commitment to ending sexual violence. It is apposite to the forthcoming Summit for Preventing Sexual Violence Initiative (PSVI) to be held in UK in November, at which it is hoped states will agree to take action nationally and internationally in support of the PSVI.

For the full story please go to the link here.