The Kenyan Peacekeeper Championing the Ideals of the Women, Peace and Security 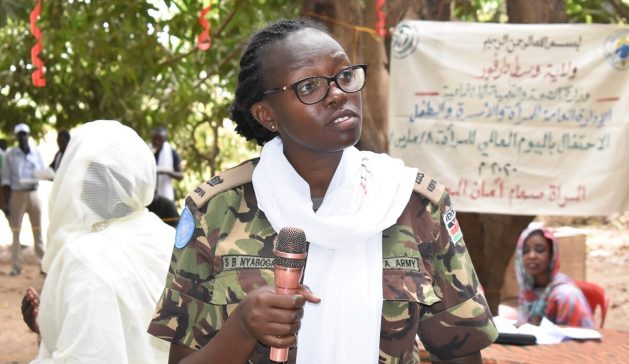 Major Steplyne Buyaki Nyaboga of Kenya has been named the UN 2020 Military Gender Advocate of the Year. Bestowed annually since 2016, the award recognises an outstanding peacekeeper whose work contributed to the promotion of women, peace and security.

Major Nyaboga singles out the establishment of gender-responsive military patrols in farming communities in Central Darfur, Sudan as one of the proudest moments of her two-year mission with the African Union–United Nations Hybrid Operation (UNAMID).

Before these patrols, displaced women farmers expressed crippling safety concerns over getting to their farms, which hindered their ability to provide for their families.

The patrols brought security and peace to the women – hallmarks of the UN Security Council’s resolution 1325 of 2000, which recognises the unique impact of armed conflict on women and girls.

Read the full story: The Kenyan Peacekeeper Championing the Ideals of the Women, Peace and Security (ipsnews.net)