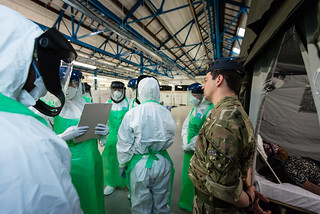 Simon Kuper has written an article in the Financial Times Magazine in which he says “the cult of the health worker is replacing the cult of the soldier”[1]. It takes a global pandemic to shift our sense of what’s important to us. Who or what is the real enemy? The soldier should embody the ethos of the health worker in being seen first and foremost as a vital service to its citizens and communities: the cult of the service provider. What is interesting is that the health worker is mainly seen as female, whereas the perception of the soldier is male. Could the outcome of achieving a better gender-balance in both be a better society? Could soldiers be the new healthcare workers?

The UK Army most notably has been used to build the field hospital at the Excel Centre in London, as well as helping with logistics of supply and demand in health equipment, and being trained to drive oxygen tankers to ensure a constant supply of oxygen to hospitals in the event of staff sickness and self-isolation. Earlier this year, parts of the UK experienced frightening levels of flooding, and the armed forces were drafted in to help. And there are memories of fire fighters’ strikes and green goddesses taken over by the Army. How important that a country has a well-trained professional body of people on hand when disaster strikes and its citizens are in a life/death situation.

Having spent time doing research in South Africa, the military there is used for a multitude of purposes: tackling mountain fires, preventing wildlife poaching, securitising borders, assisting in community development, such as building water and sanitation works, and South Africa prioritises the use of soldiers for peace-keeping and has a major contingent working in the DRC. Here the role of the armed forces is promoted as a necessary part of public service provision. Every country has its own unique set of vulnerabilities and priorities, and the military is there to serve and protect its citizens.

Can we ditch the ‘military as a projection of power’? Is it appropriate to question the balance of military/weapons spend vs health spend? What can we do about the over-reach of security forces? Such questions raise the possibility of shifts in public opinion re priorities, values, resource allocation, and skill sets that put the public’s well-being at the core of national security[2].SecurityWomen strongly supports the UN Secretary General’s call for a global cessation of conflict, for warring parties to stop fighting each other in support of the global effort against COVID-19: the common threat facing all of humankind.

One thing the COVID-19 pandemic has shown is that no country is above a global crisis such as this. The response falls to the level of each nation-state, shown in the scramble to repatriate citizens and close borders. The pandemic has highly gendered impacts and consequences. The mantra ‘we’re all in this together’belies the structural inequalities of gender, as well as poverty, race,ethnicity and religion, plain to see in different configurations around the world.

In patriarchal societies (which is in most countries) obvious gendered outcomes are playing out:

·      At a household level (where people are self-isolating) caring of elderly relatives and children, including home-schooling, is mainly undertaken by women

The last point is an indication of the unequal power structures between men and women at the heart of society. It is necessary to protect women and girls, but it is also necessary to attempt to change the adverse power imbalances that lead to increased violence against women and girls.

An enlightened approach is to break down the sexual divisions of labour, with its accompanying understandings of masculinity and femininity, so that it is encouraged and welcomed for men to be nurses and women to be soldiers. The resultant diversity of workforce would provide better outcomes, not only in terms of employment for men and women, but also better balanced organisational cultures and a better societal outcome. Could healthcare workers be the new soldiers?

[2]Taken from article by Sanam Naraghi Anderlini, LSE, ‘Women peace and security in the time of corona’, 25th March 2020.

[3] In France, domestic violence is up by 30% (https://www.euronews.com/2020/03/28/domestic-violence-cases-jump-30-during-lockdown-in-france);China reports increases in GBV (DFID, VAWG Helpdesk Research Report No. 284);evidence exists from previous disease epidemics (DFID, as above)