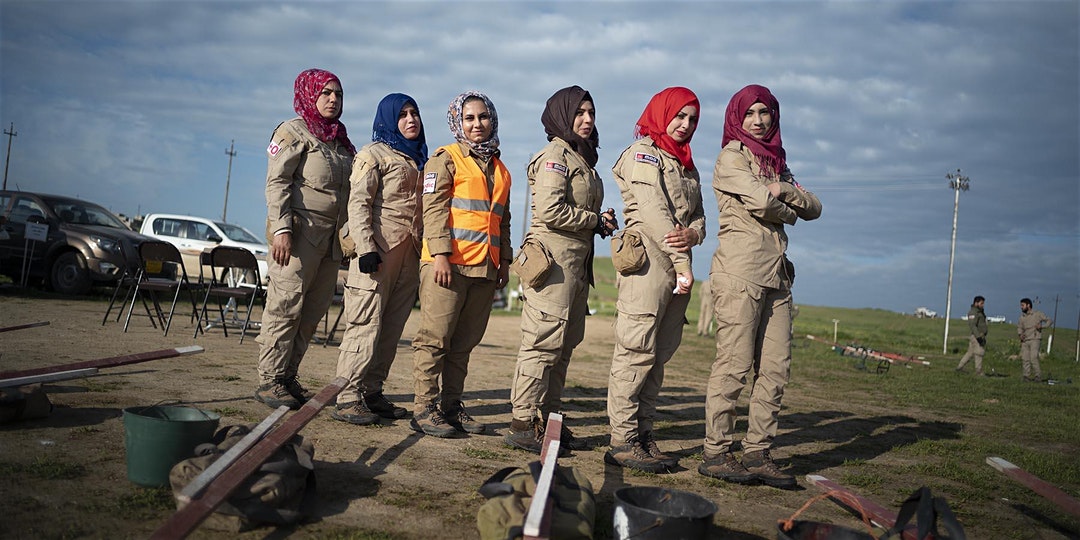 In celebration of International Women’s Day, Mines Advisory Group (MAG) America hosted a film screening of award-winning director Orlando von Einsiedel’s ‘Into the Fire,’ a short documentary about MAG’s work in Iraq. The film follows one of their de-mining teams in Iraqi Kurdistan, led by a woman named Hana. The team is composed of all Yazidi women, and their work to clear mines is shown as one of many ways in which they are physically and psychologically reclaiming the land and agency that ISIS sought to take from them.

After the film, MAG staff discussed their work in Iraq to shed light on some of the nuances of their gender focus in de-mining programming. The film underscored that de-mining work challenged gender stereotypes about women’s ability to work in dangerous fields, and it provided women in these communities with economic opportunities to make an income. The discussion dove into the nuance about how a gender-sensitive approach to de-mining also helped MAG better serve the needs of the community. Before de-mining of a new area begins, communities are consulted on their priorities. Women de-miners were able to go into homes and female spaces and ask women in these communities what their priorities were instead of responding solely to the needs of men. Further, being able to speak with women directly improved outcomes as women were included in the process of warning children away from mine fields. The work that these women do is a critical first step in the peacebuilding process in Iraq, as it allows communities to return to their homes, work, and invest in the infrastructure needed to rebuild after ISIS.

Their work also symbolically challenges the patriarchal culture of ISIS, a fact that was repeated throughout the film. Although the first women de-miners in Iraq were Yazidi, their work has made it difficult to argue that women should not be in this line of work and has  paved the way for new groups of Arab women to participate as well. Particularly within the Yazidi community, this de-mining work is a critical step in reclaiming agency after ISIS. At the end of the evening, one of the panelists reminded the audience that as this work was happening, Yazidi communities could stand at the top of Sinjar Mountain and see the frontlines of where ISIS had been pushed back; ISIS was not a distant threat, operating only a few kilometers from where Hana and her team were working. This film was a celebration of women’s resilience and a testament to the importance of including women in peace and security.