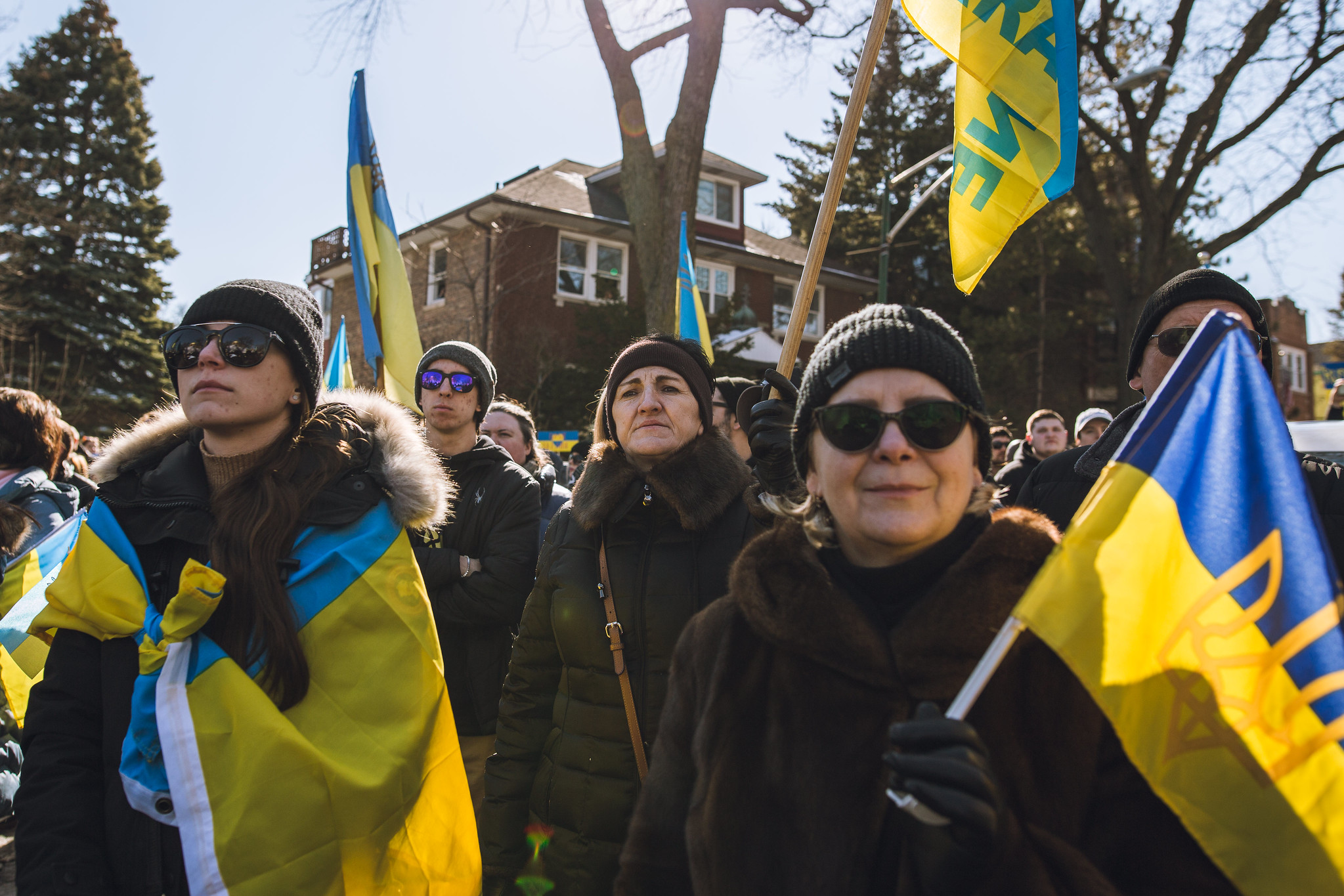 At a time when the world is facing manifold challenges including rapid climate change, health pandemics, conflict, violence against women and girls, is it not time for humanity to shake off the lethargy that prevents substantive positive change and declare it is time to stop?

The Europe and North America Caucus for the Commission on the Status of Women, is moved at this 66th Session, when we are deliberating the effects on women and girls of climate change, and bombarded by images of human suffering unravelling before us every moment through all communications channels, and the voices of Ukrainian women speaking to us directly from areas being bombarded by artillery in a manner no one would have thought possible since 1946, to call for action.

We cannot remain silent on the conflict in Ukraine. We stand in solidarity with our sisters surviving conflict across the globe, but at this moment, Ukrainian women are suffering the results of the failure of global governance. Their voices are heard. We feel their pain and anger.

In recent times, still so vibrant in our collective memory, we have witnessed the human tragedies and preventable loss of life, in all conflict affected areas: Afghanistan, Iraq, Syria, Libya, Yemen, Myanmar,Sub Sahara Africa, Northern Cameroon, Congo, Central African Republic, Sudan,South Sudan and now Ukraine. Our sisters are still suffering. Millions of women and children, are being displaced from their homes facing famine, becoming victims of further violence such as rape, human trafficking, prostitution, and pornography. They bear the brunt of all wars; their bodies are the battlefields on which their perpetrators claim victory. They are bearers of environmental and climate disasters, while yet they are communities’ builders and family pillars. All these women have been left behind.  Will the women of Ukraine and their families also be left behind?

UN Security Council Resolution 1325 (2000), was a milestone resolution including analysis and solutions – yet more than 21 years later it is still not implemented. It is a cornerstone for peacebuilding work and processes, recognizing for the first time the role of women in conflict, as targeted victims and as actors in the prevention and resolution of conflict and equal participation in peacebuilding and decision making. Now is the time for full implementation of 1325 and for including women at the negotiating and decision-making table without delay, not only but including in Ukraine.

We call on the Secretary General Mr. Antonio Guterres to focus immediately on the Implementation of UNSCR 1325. Noting the commitments in the 2030 Agenda for Sustainable Development and the Beijing Platform for Action linking equality of women and men with peace and the 2010 report of the Secretary-General’s seven-point action plan on gender-responsive peacebuilding, we call on all stakeholders to take urgent action to implement the solutions already outlined.

We call on the UN Secretary General to organise an extraordinary Town Hall during the second week of the CSW66 on Women, Peace and Security. Invite women’s organisations from conflict zones,particularly women from Ukraine, to listen to their concerns, to have an open dialogue and consult with women’s civil society on building sustainable peace and their participation in all stages of peace negotiations and the (post)conflict resolution processes.

We call on UN Women to initiate and fund training and to facilitate women and civil society to form Peace Keeping and Negotiating Teams in all regions of countries in conflict and war, and in particular Ukraine; ensuring a broad inclusion of representatives from all sectors of the society, in terms of diversity, age groups, professions and educational levels.

We welcome the current efforts and role UNHCR has played and call for more resources to respond to the refugee crisis in Ukraine. It is expected that up to 4 million people will flee Ukraine, the majority of whom are women and children. Special attention, including protection and services must be accorded to the elderly, persons with disabilities, minority and all other vulnerable groups.

We call on the UN Secretary General’s Special Representative on Sexual Violence in Conflict to document all forms of sexual violence against women and girls. We call on the UN to ensure that in the context of the war against Ukraine all forms of violence against women and girls, especially sexual violence, rape and trafficking are documented and identified as war crimes to subsequently provide evidence for the International Criminal Court and all other relevant Courts. Women and girls trapped in and fleeing from conflict and war are extremely vulnerable to sexual exploitation by traffickers and organised networks, including abduction and subtle forms of enticement due to their heightened vulnerability in these situations, luring them into prostitution. Efforts to prevent and stop this must be intensified. It is urgent that women and children receive effective protection from the risks of trafficking into prostitution and that all protection and law-enforcement agencies are on the alert. There can be no impunity for trafficking in women and girls.

The UN was created to ensure peace and prosperity for humanity. We believe it is time for all leaders to use meaningful diplomacy to achieve this. Universal peace and a Culture of Peace is possible in this century, what is lacking is political will. What is required is a re-shaping of our thinking. We call on world leaders to come together immediately to make and ensure peace.

We, the Europe, and North America Caucus for CSW vehemently oppose any solution that will lead to further armed conflict.Responding with violence to violence can only lead to more human tragedy,environmental destruction, investments in armament and further economic disaster. Long lasting victories are those of peace not of war.

At this CSW looking at climate change and the disasters it creates, we must state more strongly than ever before,that we share this planet with each other and all living things on it.  We are one humanity living on one planet.  It is imperative that solutions are found to eradicate conflict.  We call for a new understanding and practice of multilateralism- a multilateralism based on the reality of the oneness of humanity.