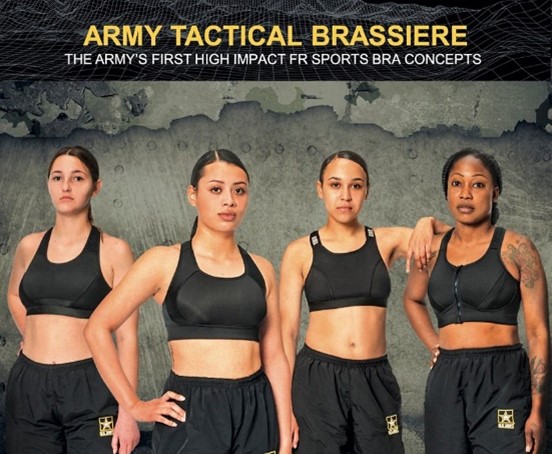 The US Army has released plans for its new ATB: the Army Tactical Brassiere (Autumn 2022).

‍
‍Women in the armed forces need better support. Literally.
‍
If military employers want to improve female participation and performance, they must not only provide basic kit suitable for all bodies but also invest in improving the functionality and fit of athletic underwear.

"A best friend is like a good bra: hard to find, close to the heart and always there for support!"
‍It’s a glittery birthday card cliché, but it's true. The difficulty of finding – never mind affording – a high-quality sports bra is a struggle that many of us know all too well. As women’s sport has become increasingly professionalised over the past decade, increased interest in and funding for high performance sportswear has gradually increased mainstream demand for properly supportive activewear. The clothing requirements of sportswomen performing daily high-intensity activities and extreme, physically-demanding training in all weathers are mirrored by the needs of female military personnel. The benefits of pooling research and development in this area are obvious to any who care to look. Yet only recently have female athletes and female soldiers begun to be taken seriously in their call for more supportive, professionally-designed bras.

In August 2022, footballer Chloe Kelly’s shirtless celebration after winning the European Championship prompted more widespread discussion of sports bra development in the UK and beyond. The Huffington Post revealed that Kelly’s Nike bra had in fact been ‘prescribed’ by a professor of biomechanics at the University of Portsmouth, Joanna Wakefield-Schurr, consultant to the FA on all things breast health. Much like the gait analysis already familiar to runners purchasing new trainers, professional sports bra fittings for athletes now use similar technology to assess the right kind of support each athlete requires to maintain chest tissue health and perform at their peak.
‍

“It’s important to recognise that Soldiers are the ultimate athletes”

In the United States, where opposition to women in military combat roles remains high, there has nevertheless been a recent shift in attitudes regarding improving women’s basic kit. In 2018 an all-female panel was commissioned for the first time to assess the suitability of the US Army’s uniform for women, resulting in the long-overdue replacement of skirts with tailored trousers as the default option for all recruits. This autumn, the US Army will present its new designs for the first ever ‘Army Tactical Bra’ (ATB) to the Army Uniform Board. The new models provide excellent support in a range of conditions and activities, from carrying heavy rucksacks in arid desert environments to standing to alert in layers of body armour or torrential rain. This is all a long way from early efforts to provide military underwear to women, such as the Swedish Army’s standard issue bras of the late 2000s which had unreliable fastenings, a tendency to disintegrate during exercise and highly flammable fabrics.

Some have expressed concern over the apparent lack of sizing nuance in the American plans, however. One veteran remains wary about celebrating the new designs before all information has been released. Citing her own experience of ill-fitting stand-issue bras during basic training, when she had a choice of only 4 basic bra sizes, Sarah Hoyt told a Washington Post interviewer that any attempt to “shoehorn women’s body parts into such rigid size categories is planning to fail”.
‍

In the UK meanwhile, the issue of fit is now central to reformed uniform policy. Aftera 2021 study drew attention to the serious health effects of poor sports bras on military recruits, the British Army established an initiative to issue all female recruits with a personalised set of professionally-fitted sports bras. The project has already produced extremely positive initial results, with personnel reporting marked improvement in comfort, posture and performance during basic training. By contracting a supplier to professionally fit their bras to each soldier’s measurements, training needs and comfort preferences, the British Army can make a small one-off investment in each recruit which significantly enhances performance as well as physical and mental health. Following the Army’s lead, the Royal Navy has announced plans to introduce fitted sports bras for new recruits from March 2023 and the Royal Air Force has also indicated intent to bring in sports bras as part of a wider uniform policy.

Captain Joanne Ellett, a GB Winter Olympian and Army Rugby 7s player, has been an outspoken advocate for the British army’s new policy on sports bra provision, but she points out that there is still crucial work to be done to educate everyone in the forces as to the importance of breast health. "Education on breast health is not just for women, the majority of the chain of command are men,” she said in an interview with the UK Ministry of Defence. “The next level is taking it further. The education bit is next, teaching people that you should wear a sports bra no matter what size you are”.

Alice MacLeod is a PhD student researching intersections between language, gender and security.